The EU annual budget is always balanced, so there is no deficit or debt. It consists mostly (>90%) of payments for the current year plus commitments in future years (<10%).

Country contributions to the budget vary principally according to country Gross Domestic Product. They average about 1% of GDP (the EU uses a similar measure, called Gross National Income – GNI). The GNI contribution is the major item but country contributions also include a VAT contribution, tariffs and levies. (See NAO diagram below for more details). 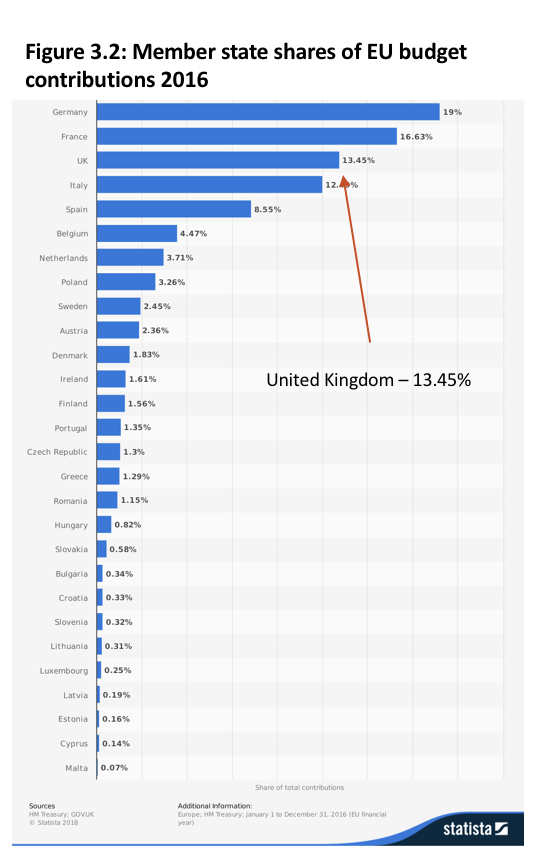 The chart shows that the UK contributed 13.45% of the EU budget in 2016. However, when pubic sector receipts from the EU are deducted, the UK’s net contribution was about 10% in round figures.

On a gross and net basis, the UK was the third largest contributor.

Source: Statista and House of Commons Library, A Guide to the EU Budget, January 2018

This diagram from the excellent NAO briefing on the EU-UK finances shows the steps in granting funds, spending, reporting and auditing.

There is more detail on the role of the European Court of Auditors and its regular sign-off of the EU’s accounts in the section on ‘What is the EU?’.

HM Treasury recorded the UK gross contribution to the EU budget in 2019 as £18.9 billion. After rebate, this reduces to £14.4 billion (£277 million/week), which is the amount sent to the EU (including duties UK collects on behalf of EU). Against this, the UK benefited from receipts from the EU of £5.0 billion (Table 3.1.).

From 2021, the UK will make contributions to the EU for its ongoing participation in EU programmes such as Horizon, where these are agreed. The EU-UK Trade and Cooperation Agreement makes provision for participation.

The UK net contribution in 2019 was £9.4 billion, taking account of £5.0 billion in EU payments to the UK public sector (the majority represents receipts under the Common Agricultural Policy).

In addition, UK organisations received funds secured through competitions (for example, for research in UK universities). The House of Commons Library estimates that between 2014 and 2018 these additional receipts were between £1.0 billion and £2.0 billion each year.

Leaving the EU theoretically improves the UK’s public finances by saving the UK contribution, but this is just part of the story. All reputable economists agree that Brexit reduces UK national income by much more than the contribution. Scroll down for the economic benefits of EU membership. Also, see section on impact assessment.

Source: House of Commons Library, The UK’s contribution to the EU budget, 4 January 2021

Table 3.2 shows the components of UK contributions and public sector receipts 2014 – 2019. In addition, the UK received funds through competitions for funds.

Note that the UK contribution included the UK’s share of the EU’s international aid budget for which the UK’s share was about £1 billion in 2015/16. This counted towards the UK’s overseas aid target of 0.7% of GDP. Assuming this target continues, after leaving the EU, the UK still needs to spend the £1 billion on aid to meet the target. Assuming an aid figure of £1 billion for 2019 meant that the UK could only have ‘saved’ £6.9 billion a year (£133 million/week), even less than the net figure of  £7.9 billion in Table 3.1.

Source: House of Commons Library, The UK’s contribution to the EU budget, 4 January 2021

In August 2016, the Institute for Fiscal Studies (IFS) reviewed several reputable economic studies about the costs and benefits of different options for UK’s relationship with the EU. The IFS concluded that membership of the Single Market was worth an additional 4% of UK GDP over the long run. 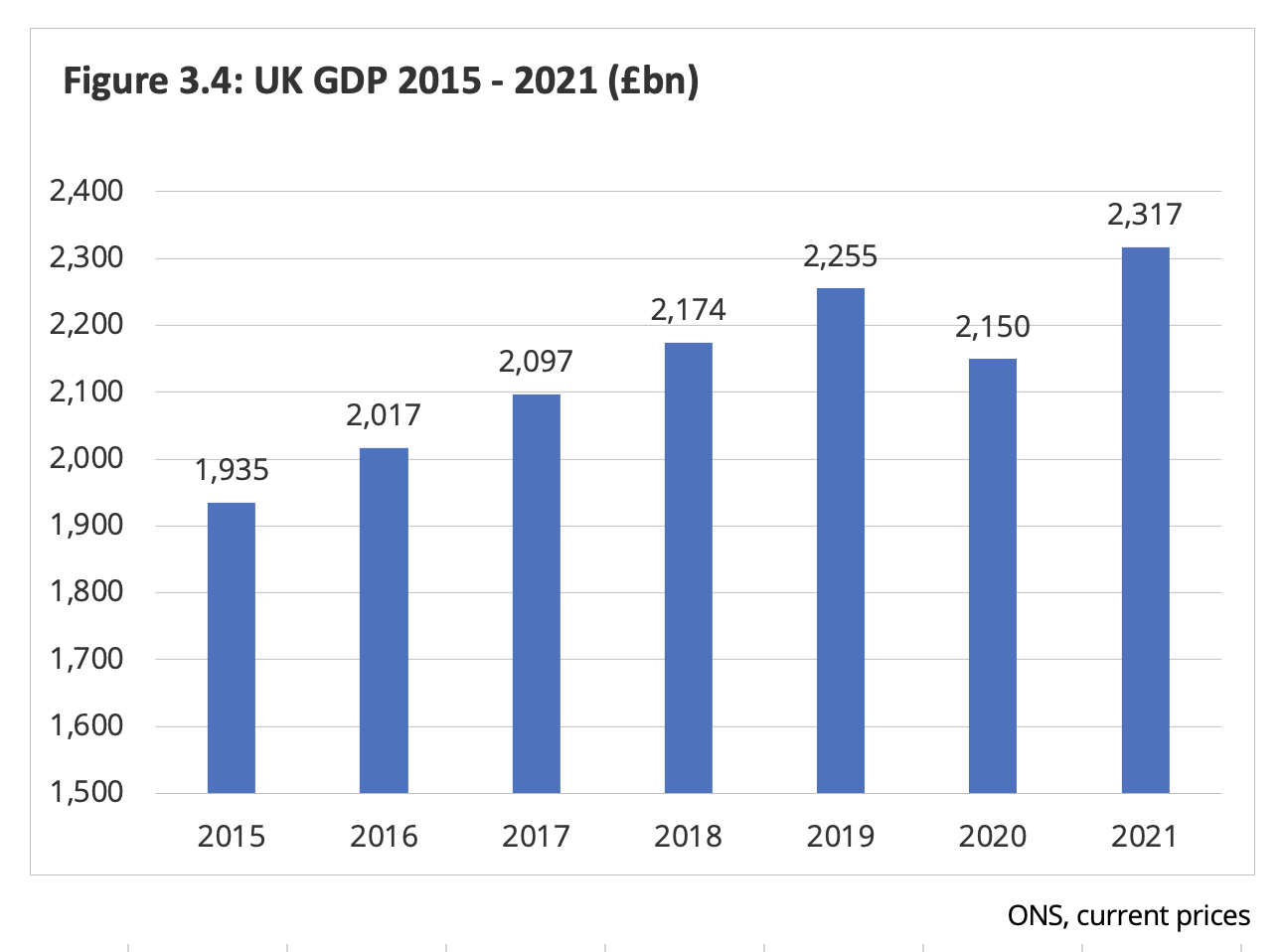 The economic benefits of EU membership come mainly from:

Public finances are sensitive to changes in GDP and fiscal policy. In its projections, HM Treasury typically assumes that 35% – 37% of GDP flows through to public finances. Applying these percentages to an additional £87 billion of GDP in 2019 indicates that:

The UK committed to honouring its share of gross EU liabilities accrued while Britain was a member state until 31 January 2020. One important objective of the first phase of the Brexit negotiations was to determine how to calculate the financial settlement.

As the Attorney-General stated in Parliament on 15 January 2019, the UK had an international legal obligation to pay what it owed to the EU. Indeed, the Withdrawal Agreement (which covers the financial settlement) is legally binding.

Although, the UK’s exit payments will be spread over several years, about 75% is payable by end 2020 and the majority by 2024. Thereafter, small annual annual payments will continue until 2064 of about £50 million a year.

The main liability is the UK’s share of unpaid spending commitments in the 2014-20 financial plan at the end of the transition period (31 December 2020). To this will be added other obligations such as pensions and about contingent liabilities in relation to decisions taken while the UK was a member, such as guarantees in relation to outstanding loans from the European Investment Bank. HM Treasury, the OBR and the European Commission all believe that that these liabilities are likely to prove minimal.

Using the UK’s share of EU contributions of about 13%, this implied a gross liability of about €100bn. From this will be deducted:

As a result of the extensions of Article 50 to 31 January 2020, the UK has continued to pay monthly contributions to the EU. By 31 December 2020, following monthly payments during the transition period (including £8.4 billion for 2020), the outstanding financial settlement was ~£34 billion.

The National Audit Office (NAO) has warned that the outcome is uncertain and the settlement could easily be higher.