Brexit implications for defence and security include:

The major threats currently facing the UK (and the EU27) are cross-border and transnational:

Given the cross-border nature of these threats, addressing them requires international collaboration, cooperation and responses.

The Lisbon Treaty, which came into force in 2009, strengthens the solidarity between EU countries in dealing with external threats by introducing a mutual defence clause (in Article  42(7) of the Treaty on European Union). This clause provides that if an EU country is the victim of armed aggression on its territory, the other EU countries have an obligation to aid and assist it by all the means in their power.

The Common Security and Defence Policy (CSDP) is a major element of the Common Foreign and Security Policy of the EU and is the domain of EU policy covering defence and military aspects. The CSDP provides the framework for military operations and civilian missions conducted in support of the overarching EU Common Foreign and Security Policy. The UK, along with France, has been a prime mover in its development. The CSDP maintains clear “red lines”, such as the non-duplication of NATO’s operational planning and command structures.

The UK has played a leading role in CSDP activities but, long before the referendum, had started to walk away from the CSDP and cut back its contribution to EU deployments. It now ranks only fifth among the contributors to CSDP military operations, after France, Italy, Germany and Spain. The UK ranks seventh for civilian missions, after Germany, Netherlands, Poland, Sweden, France and Finland.

Synchronised Armed Forces Europe (SAFE) was founded in 2009 and is a concept for ever closer synchronisation of the European forces under the Common Security and Defence Policy. Participation in SAFE is voluntary.

Article 42 also provides for permanent structured cooperation between the armed forces of a subset of member states. The treaty set out the means for this in Permanent Structured Cooperation (PESCO). Through inter-governmental cooperation, PESCO allows member states to jointly develop military capabilities, invest in shared projects and enhance their respective armed forces.

In late 2017, the European Council (the EU heads of state) committed to deeper defence cooperation under PESCO involving 25 member states (excluding Malta, Denmark and the UK). This comprises 17 joint defence projects to begin in 2018, including establishing a pan-European military training centre, improving capability development and introducing common standards for military radio communication. Decision-making remains with individual member states but the programme provides operational steps towards a longer-term Defence Union. On defence matters, unanimity is required so, for example, each member state has the ability to veto a European Army. 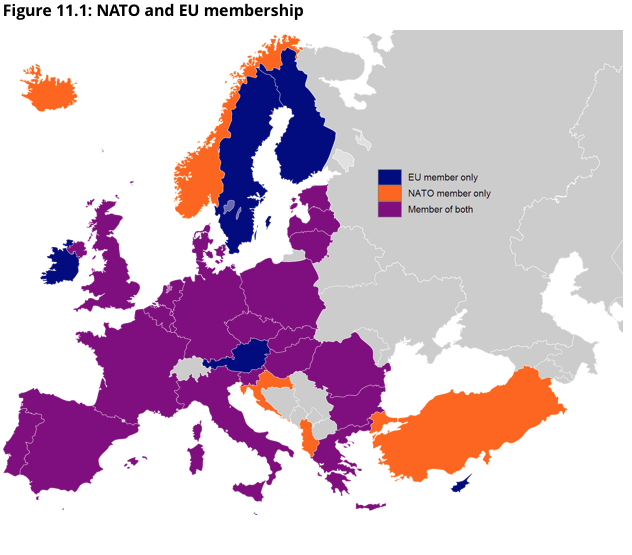 The UK has regarded NATO as the cornerstone foe defence, with the EU playing a subsidiary and complementary role.

Figure 11.1 shows the relationship between EU and NATO membership.

On a national basis, the UK has the second largest defence budget in NATO, after the US.

The EU has the third largest arsenal of nuclear weapons, after the United States (6,800 including those deployed in EU) and Russia (7,000). The EU possesses 525 warheads, and hosts between 90 and 130 US warheads. Six EU states host nuclear weapons:

While most defence budgets in Europe have been contracting (military expenditure among EU28 had fallen by 9% between 2005 and 2014), countries such as China, Russia and Saudi Arabia have been upgrading their armies on an unprecedented scale.  Figures 11.2 shows global trends in defence spending and illustrates how overall EU defence spending has declined relative to others. 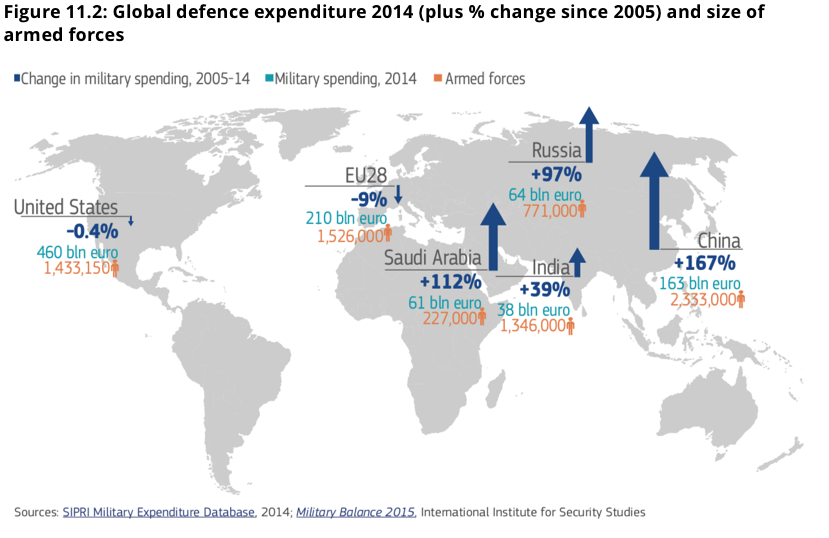 In 2017, US defence spending was more than the next top ten countries combined. The UK was the fifth spender globally and the top spender in the EU. See Figure 11.3. 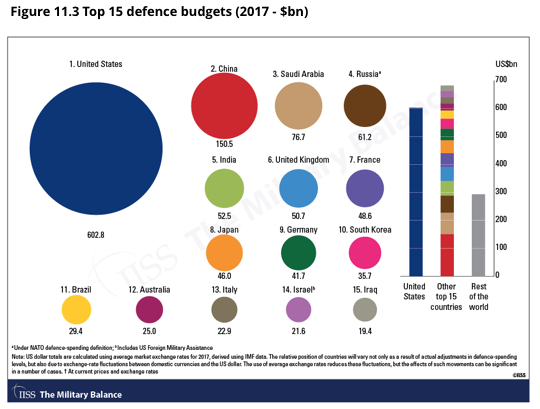 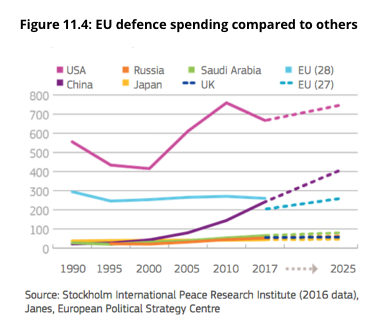 Over the last two decades, EU defence spending has declined relative to others, but has been increasing recently. See Figure 11.4. 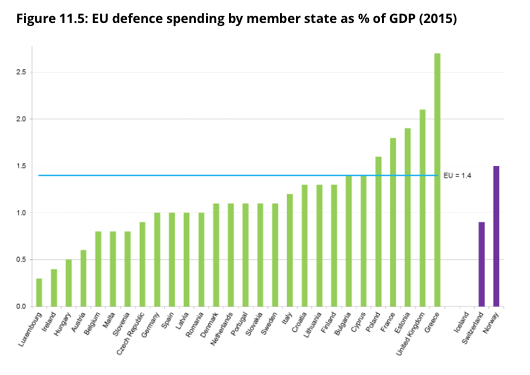 There is a long history of collaboration between member states on defence (see figure 11.6). Collaboration is currently being reinforced through PESCO (discussed above). 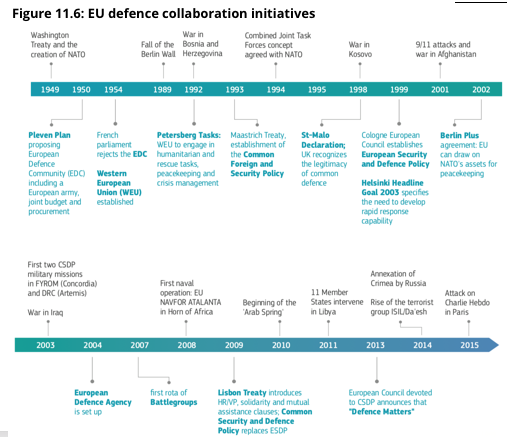 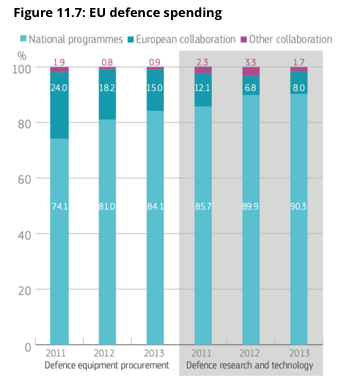 However, European countries continue to pursue costly duplications of military capabilities. In 2013, 84% of all equipment procurement took place at national level, thereby depriving countries of the cost savings that come with scale. See Figure 11.7

The lack of interoperability between 28 European armies significantly slows down the EU’s ability to intervene collectively in expeditionary missions where European interests and values are at stake.

Decreases in spending result in reduced investment in new technologies and prevent renewal of military programmes.

In its 2017 partnership paper on foreign policy, defence and development , the British Government recognised that continued close cooperation is vital for both UK and EU27 interests. The paper set out the UK’s aspirations but did not make any firm proposals on how future cooperation could be structured. The paper stated that the UK wanted a “deep and special partnership” that goes beyond any existing third party agreement with the EU. It concludes: “It is the UK’s ambition to work as closely as possible together with the EU, protecting our citizens, promoting our values and ensuring the future security of our continent.”

As of 1 January 2021 CFSP and CSDP provisions no longer apply to the UK. The TCA refers to the two parties’ recognition of “the importance of global co-operation to address issues of shared interest”. The Common Provisions of the TCA also refer to a number of common principles with an international dimension, such as democracy, the rule of law, respect for human rights and the need for cooperation and coordination within multinational institutions.

Going forward the UK will have no say, and no veto, over how EU defence progresses. There is now no official framework in place through which the UK and EU can develop and coordinate joint responses to emerging foreign policy challenges.

Future arrangements will need to mitigate the key risks of Brexit to the UK’s defence and security, which include:

Risks of Brexit to the EU27’s defence and security include:

Source: RAND Europe, A snapshot of international perspectives on the implications of the UK’s decision to leave the EU, 2017

With Brexit, the reality is that in the longer term, as a third party state outside of the EU, the UK will have no decision-making rights, and no veto, over how EU defence policy evolves. At the same time, the UK will not want to commit its considerable defence assets without a say over operations and other matters.

The issue of finding a way to participate in EU decision-making and policy formulation without formal voting rights is common across many policy areas affected by Brexit.  It is clearly in the UK’s interests to continue to have influence in EU27 defence policy and operations. It is also in the EU27’s interests to keep the UK as a close partner on defence and security. However, Brexit is likely to make it difficult to do so.

As a member of the EU, the UK’s counter-terrorism and crime operations have depended on extensive formal and informal networks of intelligence and data sharing, including, at the EU level:

Other security arrangements include:

In September 2017, the UK government published a future partnership paper on security, law enforcement and criminal justice which described at length the strengths and capabilities of the EU28’s current arrangements and the UK’s significant contribution to them.  Moving on to Brexit, it noted that current third country arrangements would be sub-optimal for the UK and the EU27. The paper made no firm proposals for the future arrangements between the UK and the EU.

Theresa May reinforced the UK’s position in a speech to a Security Conference in Munich on 17 February 2018 where she urged the EU to accelerate a new EU-UK security partnership in 2018. Mrs May offered to carve out a special exemption on the remit of the ECJ to oversee Britain’s continued involvement in pan-European crime fighting agencies such as Europol and Eurojust, as well as the European Arrest Warrant.

The EU-UK Trade and Cooperation Agreement covers security cooperation. There are supplementary joint declarations relating to PNR, surrender, the exchange of criminal record information and cooperation between law enforcement authorities. Both sides’ commitments to human rights underpin the agreement, including the European Convention on Human Rights, including a high level of protection for personal data.

The UK and the EU will:continue to share DNA and fingerprint data through Prüm, and to transfer Passenger Name Record (PNR) data. However, the UK has lost access to EU databases. Notably, the UK has lost access to SIS II which allows for real-time sharing of data on wanted or missing persons or objects. The UK police forces consulted the database 600 million times in 2019.

The EU and UK will be able to share information relevant to operations, including on wanted or missing persons and criminal record information. This will be in response to requests from the UK or EU member states and can be shared proactively.

There will be a new surrender agreement to replace of the European Arrest Warrant. There are clear provisions relating to: