Business investment is an important component of gross fixed capital formation (GFCF), and, in 2018, accounted for £224 billion or 10% of GDP (2019 prices). Both the UK’s decision to leave the EU and Covid have had a large impact on business investment.

Investment is a key driver of future prosperity. It is important for the demand side of the economy, but it also affects the supply side, because of the link between investment and productivity growth. Hence, as the Bank of England notes, investment affects the balance between demand and supply, which has an impact on inflation

GFCF is total net capital expenditure by public and private sectors. It includes business investment and accounted for £397 billion or 18% of GDP. Examples include spending on plant and machinery, transport equipment, software, new dwellings and other buildings, and major improvements to existing buildings and structures, such as roads. GFCF is the ‘investment’ part of the expenditure model of GDP described in the section on ‘why trade matters’ in the section on economic context.

Both GFCF and business investment are domestic measures. Investment by foreign companies in the UK and overseas investments by domestic companies are covered separately as foreign direct investment (FDI)

There was a severe drop in both GFCF and business investment (to an indexed value of 93; Q1 2000 = 100) in the recession following the global financial crisis of 2007-8. Business investment then recovered steadily until 2016 (at an average growth rate of about 6% a year). See Figure 7.1.

International statistics are available for GFCF but not business investment. 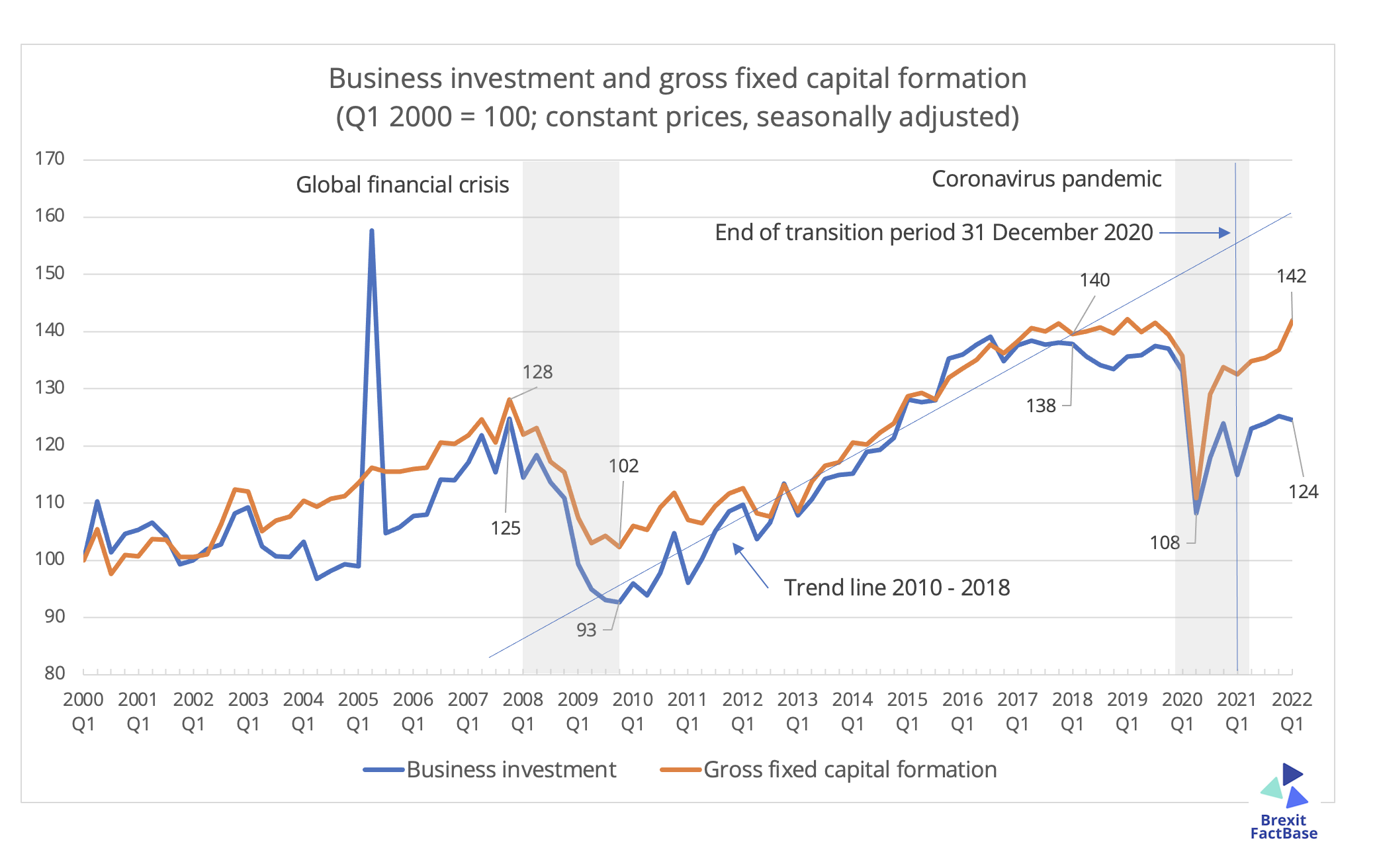 What does FDI mean?

FDI covers a range of company investments, such as:

FDI can be inward or outward, for example:

If you would like to know more about FDI, please see the House of Commons Library Report of 2020 on FDI statistics, the annual UNCTAD World Investment Report or the OECD’s annual FDI in Figures report.

We focus on inward FDI as an indicator of the UK”s relative attractiveness as a destination for foreign investment. As an EU member and ‘gateway to Europe’, the UK benefited from strong inflows of foreign investment, particularly in the 1980s.

The balance between inward and outward FDI, including investment income, can have important implications for the exchange rate, but these are not addressed here.

Global FDI flows surged 64% in 2021 over 2020 (Figure 7.2), reaching USD 1.6 trillion and surpassing pre-pandemic levels by 37%. The US and China saw the biggest increases but many other economies also recorded growth. Paraphrasing the UNCTAD report for 2022 and OECD FDI in Figures:

‘[The main cause of the increase in FDI flows was a significant upswing in developed nations’ earnings on FDI, which peaked in 2021. Instead of distributing earnings back to their parents, companies reinvested in foreign locations. OECD FDI equity inflows also increased by 25%, exceeding pre-pandemic levels by 4%. New investment activity was generally strong in 2021, but the prospects for 2022 remain uncertain with the war Russia is waging in Ukraine. Greenfield investment  in emerging and developing economies remained weak in 2021. Investor uncertainty and risk aversion could also depress global FDI in 2022.]’

Note – there can sometimes be differences between the figures that UNCTAD and OECD choose to use for FDI because global reporting of FDI inflows does not always equal FDI outflows (although they should be the same). 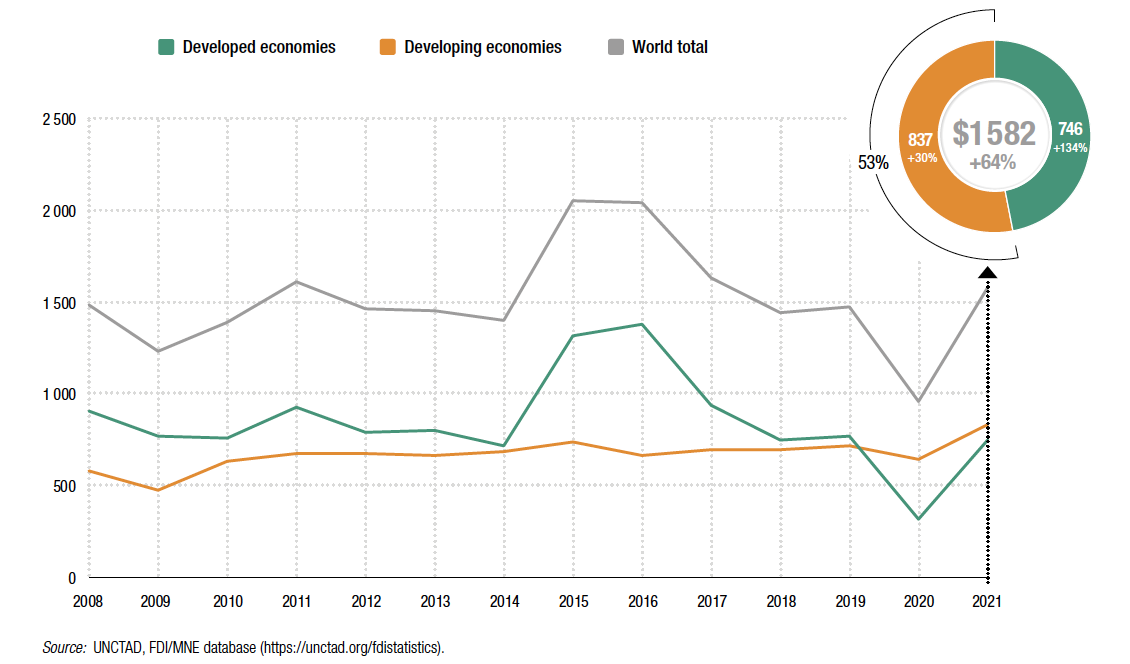 FDI plays an important role in the UK economy, which has been an attractive destination for foreign investors. In 2021, the UK ranked fourth globally in terms of FDI stock, behind the US, EU and China, and just ahead of the Netherlands. Inward FDI as a percentage of GDP, was 83% for the UK compared to 62% for the EU27. 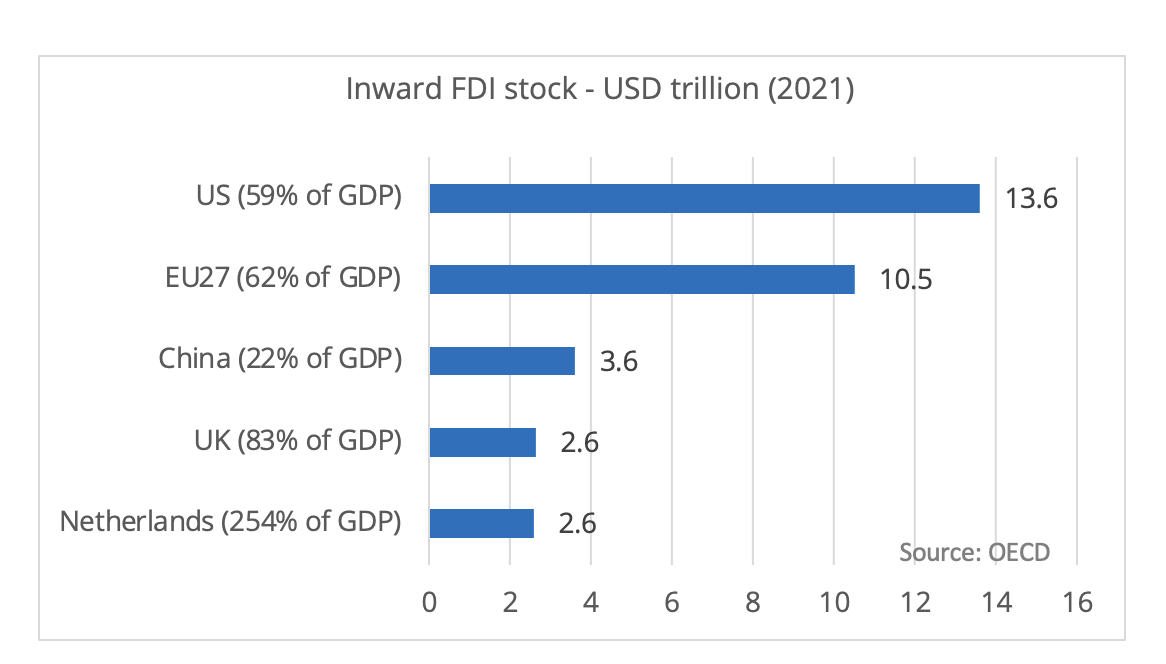 In 2021, the US, China and Hong Kong continued to dominate global inflows as they had in 2020.

The UK ranked 13th in the world with $28 billion of inflows (see Figure 7.4), up from $18 billion in 2020, but significantly below the $45 billion of inflows in pre-pandemic 2019. The UK has failed to match the global recovery in FDI in 2021, or the rates of increase seen in most other leading investee countries. However, the UK is not alone: Germany experienced a major shortfall from $65 billion to $31 billion. 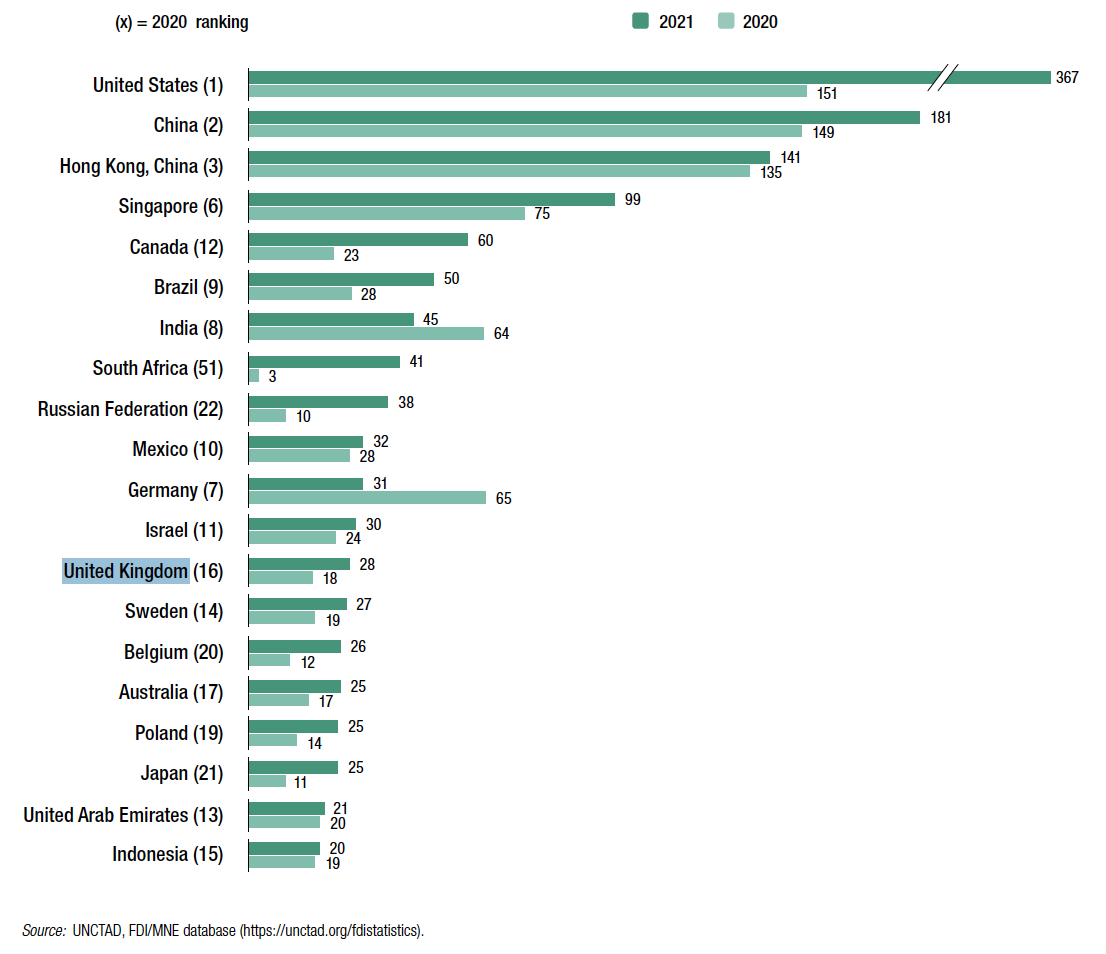 The UK’s offshore islands are the source of a further 9%. Switzerland (5%) and Japan (5%) are also important investors. 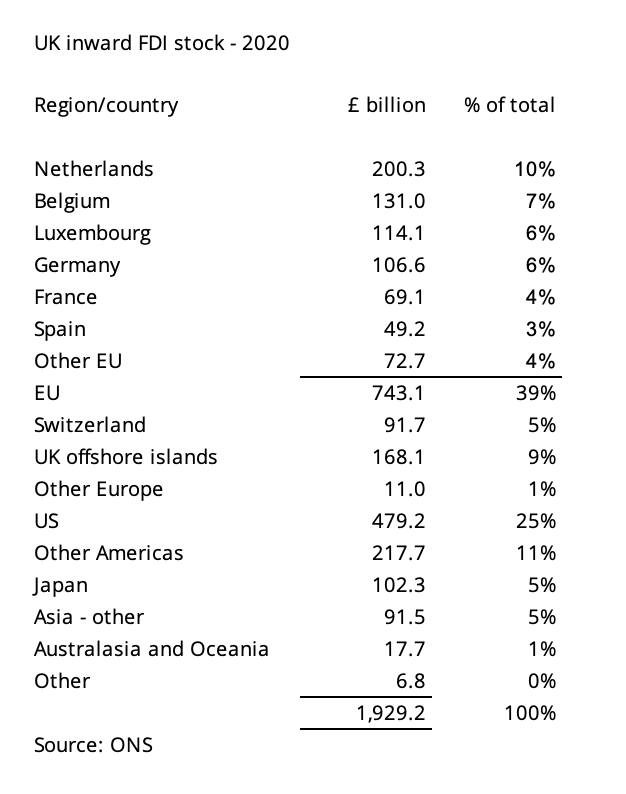 Foreign investors have invested the most in the UK’s financial service sector (Table 7.2) which, like many sectors, benefited from UK membership of the EU single market. In 2020, this sector accounted for £588 billion (30% of total) of FDI stock. A further 12% was accounted for by professional services (£228 billion) and 8% by information and communication services (£148 billion), with 9% (£169 billion) from other services.

Brexit and the associated uncertainty have delayed investment decisions and reduced annual domestic business investment. The same applies to FDI.

The value of net FDI flows into the UK was £20 billion in 2021, the fifth successive year of decline since 2016 – see Figure 7.5. Note that 2016 was a record year at £192 billion due to a few high-value mergers and acquisitions. (The figure for 2021 is a FactBase estimate, derived from the OECD figure, as ONS figures for 2021 are not yet fully published.)

The UK was on a par with Belgium and Sweden for FDI inflows in 2021. 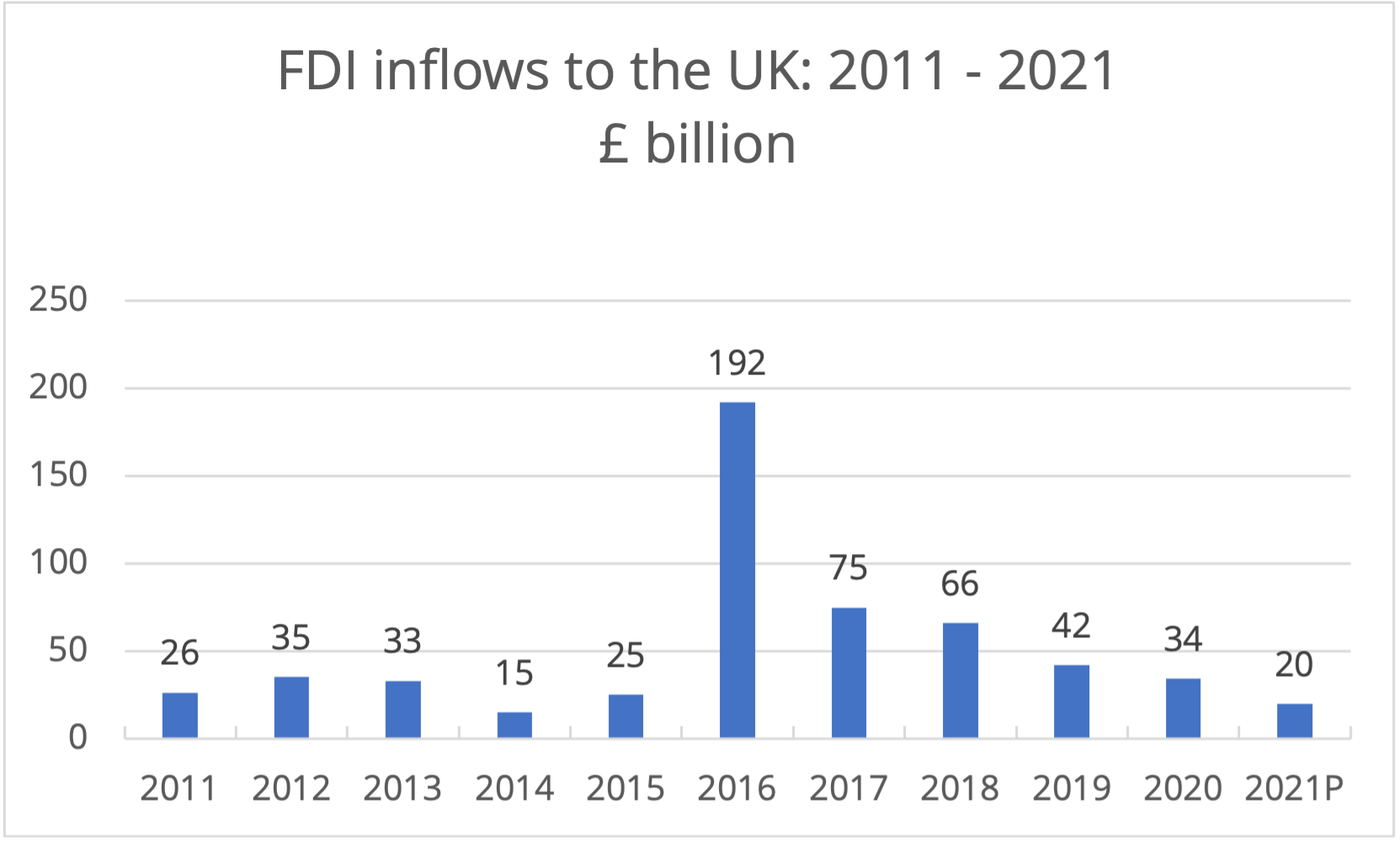 EY assessed 2021 inward FDI by looking at numbers of projects (as opposed to their value) and, despite the UK lagging Europe, was optimistic about investors’ future plans:

Free zones such as freeports and enterprise zones are often used to attract investment – both domestic investment and FDI. This section looks at:

The section is based mainly on an excellent paper by the UK Trade Policy Observatory. This includes references to further sources. In March 2021, UK in a Changing Europe published a paper on freeports which focused on the potential role of freeports in the UK after Brexit.

A freeport is a type of free zone, which is subject to special regulatory requirements, tax breaks and government support. A freeport aims to encourage businesses that import, process and then re-export goods, whereas an enterprise zone aims at general business support or regeneration objectives.

Freeports can range from secure warehouses to sites where added-value manufacturing occurs before goods are re-exported.

There were freeports (designated airports or seaports) in the UK until 2012, when the government allowed the UK laws that set them up to expire. The UK had several freeports, including Liverpool, Southampton, the Port of Tilbury and Glasgow Prestwick Airport. In all, there were seven freeports between 1984 and 2012.

Freeports are places where normal tax and customs rules do not apply. At a freeport, imports can enter with simplified customs documentation and without paying tariffs. Businesses operating inside and around the port can manufacture goods using the imports and add value, before exporting again without full tariffs or procedures. However, if the goods move out of the freeport into another part of the country or as exports, they must go through the full import process and pay tariffs. Note that freeports may simplify some trade in goods but do little for services.

There are around 80 free zones within the EU. EU freeports are more limited in their powers than other free ports around the world.

Businesses operating in freeports can benefit from:

2012 saw the reintroduction of enterprise zones across the UK with incentives such as:

There are 61 enterprise areas across the UK: 48 in England, eight in Wales, four in Scotland and one in Northern Ireland.

The UK experience of enterprise zones in the 1980s found:

EU state aid rules constrain the options for free zone and enterprise zone operations, but exemptions may be granted if the zone benefits the economic and social development of underdeveloped EU regions:

Many EU free zones and enterprise zones are in the ‘new’ EU Member States in Central and Eastern Europe. They set up special economic zones in the mid-1990s to attract FDI offering incentive schemes such as tax holidays, reduced corporate income tax rates or customs duty exemptions / deferrals. However, in the run-up to EU accession, these countries had to revise their schemes to align with EU state aid rules.

The 2019 Conservative manifesto committed to set up ten freeports around the UK. This followed a 2016 paper from the Centre for Policy Studies by Rishi Sunak. The government published a consultation paper on freeports in February 2020: ‘Boosting Trade, Jobs and Investment Across the UK’. After publishing its response to the consultation in October 2020, the government then invited bids for the ten freeports.

Freeports and enterprise zones could help with shaping export-oriented and regional development programmes. However, the economic benefits are likely to be small:

Bigger gains could come from wider use of enterprise zones. These could transfer economic activity to underdeveloped areas to help them. However, if the advantages are ‘hidden subsidies’, they would be subject to WTO Subsidies Agreement rules and to any commitments under level-playing-field provisions. For example, the EU could object to tax breaks.

And, of course, to attract businesses and investment to the UK, the government could also focus on minimising frictions to UK-EU trade, not maximising them.

Sources:
UK in a Changing Europe, Freeports, 2 March 2021
UK Trade Policy Observatory, What is the extra mileage in the reintroduction of ‘free zones’ in the UK?, February 2019
Centre for Policy Studies, R. Sunak, The Free Ports Opportunity: How Brexit Could Boost Trade, Manufacturing and the North, 2016